It Can’t Be Halloween Yet, Can it?

It’s early September, and what do I see?  Halloween decorations.  Sounds like some businesses are very enthusiastic about Halloween to be decorating this early.  Not even out of summer yet.  Well, I made this video a couple days ago about how businesses in Japan tend to decorate for Halloween far earlier than they need to.  Keep in mind that the business I show is an opticians and they don’t have a special Halloween sale going on.

Now, this video isn’t just me talking about Halloween decorations.  You’ll want to watch to the end, because I had a rather creepy encounter.

I sure didn’t expect that.

I never get tired of this view.  One of the best things about living in Kanagawa is that Mt. Fuji can be seen from almost anywhere, as long as your view isn’t obstructed.  If you’ve been following my blog for a while, you may recognise this view.  On the left is Mt. Fuji covered with snow and some clouds, while the mountains in the foreground are the Tanzawa Mountains.  I’ve climbed two mountains in this photo, Mt. Fuji and Mt. Oyama (it’s the peak on the left in the Tanzawa Mountains).  No matter how many times I see this view, I am amazed.  It is beautiful.

Mt. Fuji and the Tanzawa Mountains on a very clear day. 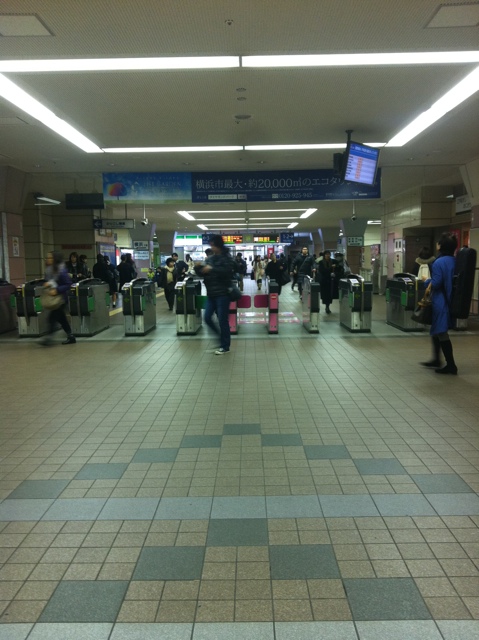 Futamatagawa Station. Many stations are so convenient, they have a convenience store in the station.

In Japan, if you want donuts, you go to Mister Donut (or Krispy Kreme).  It’s the most popular donut shop in Japan.  They’re everywhere!  I find that they’re not as sweet as North American donuts, but they’re still good.  And right now, until September 30th, they have a half off sale!  I haven’t bought any, though. When they have sales, the lineups are usually quite long. 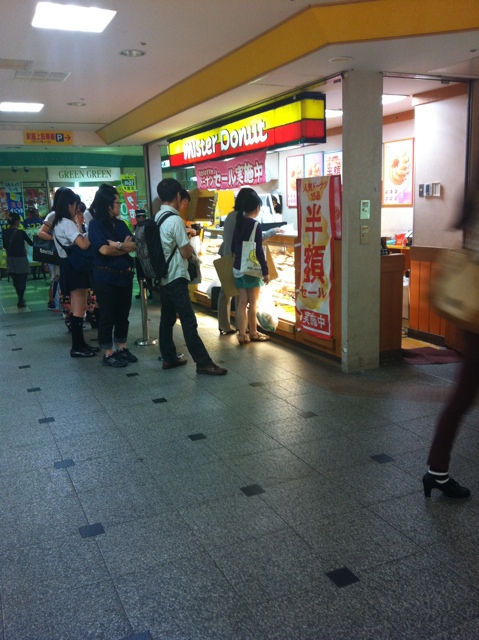 This is a pretty short line, but I’ve seen it a lot busier here.

Mt. Fuji is the symbol of Japan.  It is so recognizable, and is an example of a nearly perfectly shaped stratovolcano.  At 3776 metres tall, it is the tallest mountain in Japan.  I’ve been to the top and peered down into the summit crater.  Very exhilarating!  Today, I took this picture shortly after sunset, and you can see the peaceful cone of the volcano on the left.  Or is it peaceful?  It seems that recent measurements have shown that the pressure in the magma chamber is 16 times the minimum amount for an eruption.  But it doesn’t mean that an eruption will happen soon.  Other factors are involved for an eruption.  So for now, enjoy the view!

Mt. Fuji is always an amazing sight to see and photograph. When it’s clear, I’m lucky to be able to see it from work, on the train, and at the park near my apartment. The Tanzawa Mountains are in the foreground.

Japan has an interesting mix of new and old architecture in its cities.  Next to a shiny skyscraper, you can actually find an old wooden house. A lot of older buildings are torn down when vacated, especially when a family moves out of a house.  A new house is usually built to replace it.  There’s a constant regeneration happening in the cities.  One particular place is about to undergo regeneration. That’s the south side of Futamatagawa Station in Yokohama.  At the moment, it’s occupied by a bus terminal and a small commercial building called Green Green, which includes a Sotetsu Rosen store and Yokohama Bank.  One building has already been torn down, previously occupied by a bookstore.  There are plans to build a major road through this area, as the road network isn’t very convenient.

This building, Green Green, is slated for demolition, possibly later this year.

Replacing Green Green will be 2 buildings.  One is a highrise apartment/condo building of about 29 floors (or so I’ve heard).  The other is a highrise commercial building with a shopping centre.  I’m looking forward to watching it go up.

Many times of the year, you can see fruit stands selling locally grown seasonal fruit.  This one is near Futamatagawa station, and has been there for the past week.  I didn’t get a good look at it, but I believe one of the fruits they sell there is Japanese pears, or nashi. 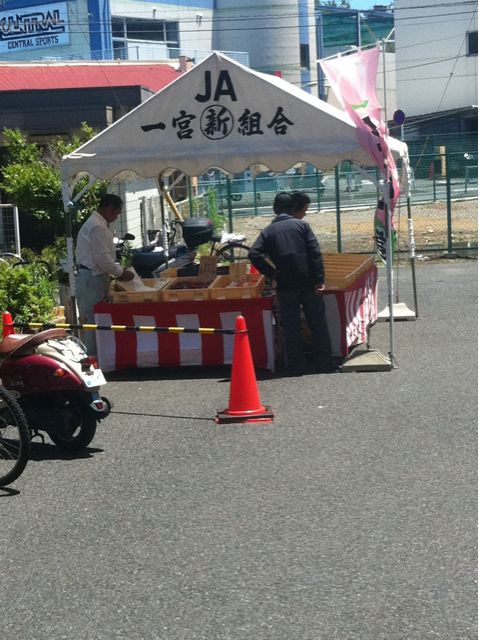