A Look Back at Typhoon Phanfone

It’s been more than a day since Typhoon Phanfone passed through the Tokyo area, and I’ve been able to see the effects around my home.  Thankfully, there was no damage.  The wind wasn’t so bad, but the rain was incredibly heavy.  South of where I live, there were evacuation orders for those living around the Hikiji and Sakai rivers in Fujisawa.  I live about a 10 minute walk from Hikiji River, but my area wasn’t included in the evacuation orders.  However, when I went out to go to work, I saw the water level in the rivers around my home.  Unbelievable.

I’d like you to check out all of the posts I made during the typhoon.  I was live-blogging the entire time.  So, have a look.

October 5th (early afternoon) – Rain and wind were increasing, but nothing major yet.

October 5th (early evening) – On my way home.  It still wasn’t so bad, but I was getting wet.

October 6th (after midnight) – My last post before going to bed.

October 6th (around 11:30 am) – The rain had stopped suddenly and it became sunny quickly.  But look at these photos of the rivers.  They were incredibly high.

October 7th – A few thoughts about the typhoon.

So, today (or I should say yesterday, as it’s past midnight now), I went down to the Hikiji River to see the aftermath of the typhoon.  The water level had risen about 2 metres, which is pretty impressive for a river that is only about 50 cm deep.  So, please watch this video.

I’ve been live-blogging typhoon Phanfone on my book blog for a little bit of fun.  I’ve made several posts so far, but the typhoon hasn’t arrived yet.  However, it’s been very rainy and windy all day.  Tomorrow morning, the rain and wind will be very strong.  Winds of around 100 km/h are expected in Yokohama.  I work there tomorrow.  I wonder how I’m getting to work.

Check out the live blogs so far.

The morning of October 5th.

The afternoon of October 5th.

The evening of October 5th.

There should be three more posts coming tomorrow.  One in the morning, one around noon, and one during my break at work.

Nothing like an early typhoon to start the summer.  While it was one of the strongest typhoons in years, it fizzled out as it passed over Japan.  Here in the Tokyo area, it was very weak.  I saw only light rain and winds that weren’t very impressive.  However, I did make a video to chronicle what was happening.  Enjoy.

This is a big typhoon.  It’s the biggest typhoon to hit Okinawa in 15 years, and it’s headed straight for mainland Japan, and should be in the Tokyo area by Friday.  Check out my video about the typhoon.

In case you’re wondering what Neoguri is, it’s actually the Korean word for raccoon dog, or tanuki as they are known in Japan.  It’s a kind of wild dog that looks like a mix between a raccoon and a dog.

I’ll have a couple more videos coming later this week, most likely.

On September 30th, there were two events.  One was local, the other was major.

First, in Ofuna, Kamakura, there was a big festival.  This was the Sanma Festival.  Sanma is the Japanese name for a fish called Pacific saury.  But not only was this a festival about a small fish that’s grilled on a stick, it’s also a friendship festival between Ofuna and the city of Ofunato in Iwate prefecture.  Ofunato was one of the cities devastated by the tsunami of March 11, 2011.  Ofuna and Ofunato share the same kanji (大船 and 大船渡).  I managed to take a few pictures of it that afternoon.

It’s a busy festival with lots of food.

This intersection was being controlled so festival-goers weren’t hit by traffic.

Look at all that food. 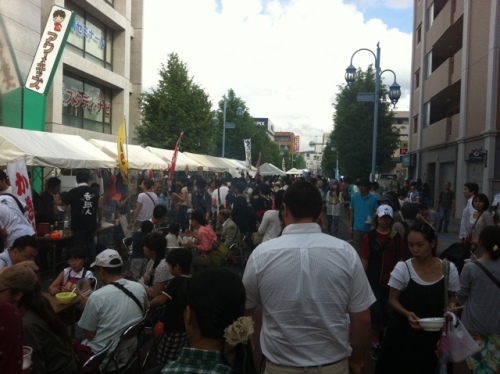 Finally, a picture from down on the street.

The festival ended at 3pm, which is quite early.  The reason was that Typhoon 17 (Jelawat) was on its way.  When it hit Okinawa, it was equivalent to a category 4 hurricane, and was called a super typhoon.  There was plenty of damage and power outages in Okinawa, but in the Tokyo area, we didn’t have to worry very much.  It rained a lot and the wind was strong, but it was pretty brief.

A wet window during the typhoon.

Typhoon number 4, or Guchol, hit Japan a few hours ago as a tropical storm.  It was earlier a super typhoon that passed by the Philippines.  While it wasn’t a direct hit to the Kanto region, it did dump a lot of rain here.  Last September, I got stuck at work during a typhoon, as the trains weren’t running.  This time, the train was running.  During my ride home, the train had to stop at one station before continuing on on an elevated rail.  While the train was several metres above the ground, the wind shook the train and even caused the windows to flex inward.  I couldn’t believe it.  I finally reached Shonandai, but was faced with a problem.  The line for the bus was incredibly long.  There were no taxis and a long line to take one.  I took shelter in one of the train station entrances while waiting for the bus to come.  That’s when I took this picture.

This picture doesn’t do the typhoon justice. It was incredibly windy with very heavy rain.

I was able to get on the second bus, which ended up being so full that many more people waiting in line couldn’t get on.  It’s difficult to stand on a bus that full.  I had no way of moving.  When it reached my bus stop, I had to push my way through all the people in front of me.  Some seemed quite annoyed, but there was someone behind me also pushing.  I quickly ran to my apartment, where I assessed the damage.  My legs, shoes and bag were soaked.  I took out anything important from my bag and hung my pants up to dry.  Not sure what to do about my shoes.  They won’t be dry enough by the time I go to work tomorrow.

This typhoon is quite unusual.  It was a very powerful typhoon, but what was unusual was the timing.  It’s only June, and we’ve already had our first typhoon.  Unbelievably, there’s a second typhoon headed toward Japan, and we’ll get wet again on Friday.