Instagram is an iPhone app that allows you to take pictures, apply filters and share with other Instagram users.  Unfortunately, it doesn’t share on the web, nor does it have a public gallery.  After searching for a website that does that, I’ve now started using Instagrid.  Please check out my Instagram photos!  If you want to see the full size, click on the little camera picture to the bottom right of the picture, where you’ll also see the comments and who liked the picture.

Samukawa Shrine is a major shrine in the town of Samukawa, Kanagawa.  It’s also a very old shrine, possibly originating more than 1500 years ago, though records state that it was rebuilt in the year 727.  I’m not certain about the age of the shrine’s current buildings, though.  The grounds are quite impressive.  It covers a large area with multiple buildings and gardens.  There are two major events at this shrine, one on September 20th, which is the shrine’s festival, featuring yabusame (horseback archery).  The other is on Setsubun (February 3), when there are illuminated paper images hung from the main gate.  When I visited the shrine last year, cherry blossoms were blooming, so it was a good opportunity for some photos.

To start off, I found the shrine’s entrance and found that there were ponds, a bridge and a long pathway leading to the shrine.  I decided to leave the outer grounds of the shrine until later, so I went directly toward the shrine. 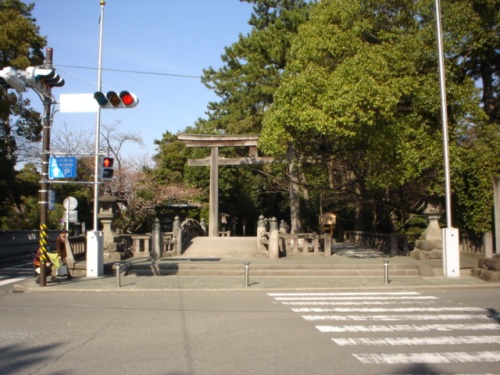 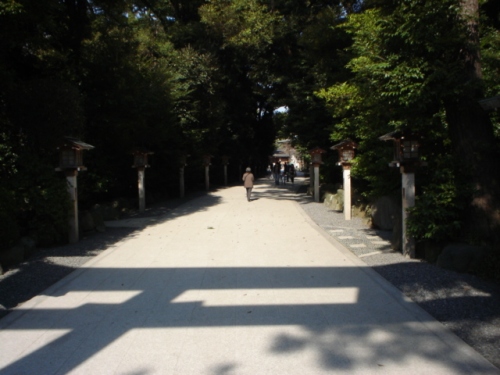 Here, I found the outer buildings and wall that surrounds the shrine.  Here, you can buy good luck charms, omikuji (fortunes) or other souvenirs.  You also wash your hands and rinse out your mouth in this area before entering through the main gate. 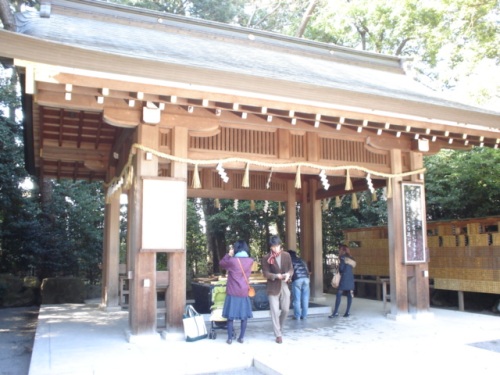 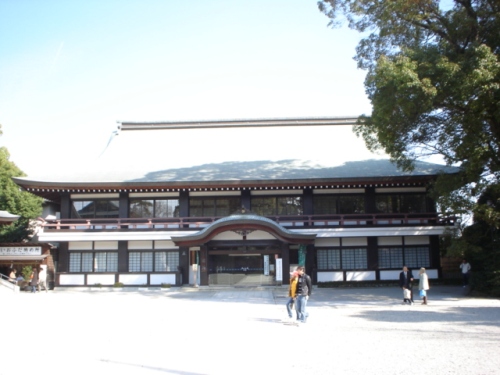 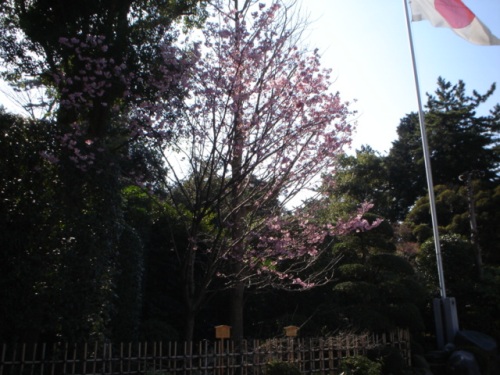 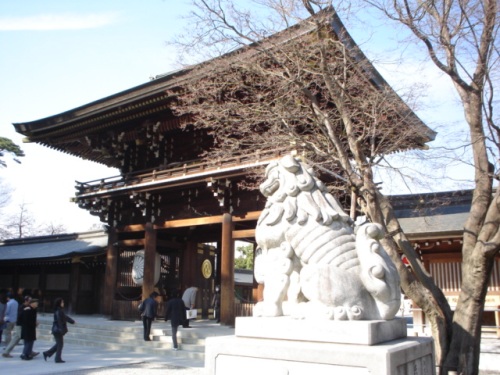 And now to the shrine’s main gate and through to the main hall (honden). 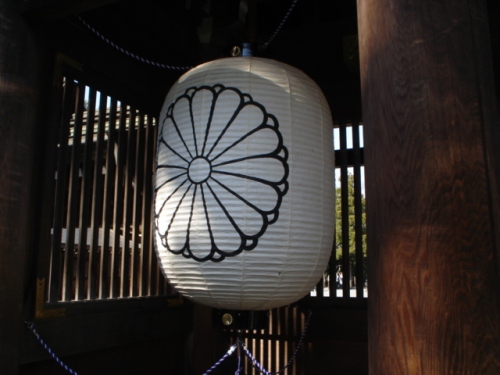 The main hall is where the shrine’s service happens.  It’s the building dedicated to the shrine’s kami (or god).  When I was there, a service was underway. 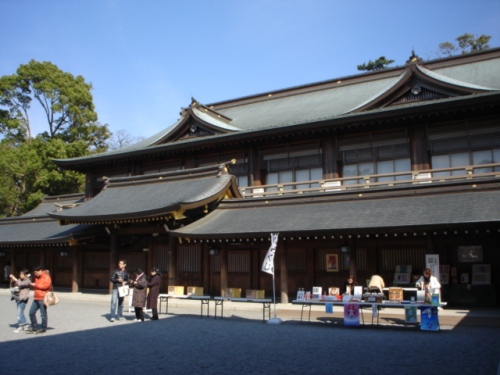 I then decided to leave the main area of the shrine and go out to the gardens.  Since it was pretty busy at the shrine, I wasn’t surprised to see yatai (food stands) selling the usual foods, like takoyaki.  The gardens are more like a forest with a pond and several more small buildings.

To get to Samukawa Shrine, take the JR Sagami Line to Miyayama Station and walk for about 5 minutes to the southeast.  You can also check out this map:

Today is the anniversary of the end of the Pacific War in World War II, and this is also one of the days that right-wing nationalists come out to protest against Americans, Chinese, Koreans, and pretty much any other foreigner in Japan.  Well, I wish I could ask one several questions, such as what they watch on TV, what their favourite movies are, what food they like, and so on.  Here’s some advice to nationalists.

If you want to live in a Japan free from any foreign influence, that is impossible.  That kind of Japan never existed.  That kind of Japan will never exist.  You need to start living in reality.  Do you want to live in a Japan without all the things I listed?  Japan’s survival depends on its ability to adapt to changing global conditions and to have good relationships with other countries.  What are you afraid of?  You can’t cope with change.  The world is always changing.  You need to learn to change with it.

I love Japan.  I’m not your enemy, I’m trying to be a friend.

Have you ever been on the train and hear a phone ring?  You’d probably be thinking some young punk or some mini-skirt wearing, makeup-applying teenager didn’t switch their phone to manner mode (aka silent mode).  But when you look up, you see that it’s an elderly woman.  Probably 9 times out of 10, it’s an elderly woman who doesn’t switch to manner mode.  To make things worse, she answers the phone and begins to talk loudly on it.  Everyone on the train looks at her, but says nothing.  We have to respect the elderly.  But what about the elderly respecting others?  I think there’s a common attitude among some of the senior citizens that they can do whatever they want.

Here’s another example.  It also takes place on a train.  A teenager was walking down the train, minding his own business, when he encountered an older man who was walking in the opposite direction.  The teenager moved to the side, so he could walk past the older man who stayed in the middle.  After they passed each other, almost in front of me, the older man turned around and started shouting at the teenager.  “Watch where you’re going!” he yelled at him.  But the teenager didn’t even touch him.  He was innocent.  The older man was a rude old fart who liked to verbally abuse the young, I guessed.

Elderly men also like to make rude noises wherever they are.  Usually, they make sounds like they’re trying to suck something out of their teeth.  They do this over and over again, then start smacking their lips repeatedly and loudly.  It sounds disgusting and extremely rude.

Whenever I get stared at on the train, it’s almost always elderly men doing it.  I challenge them to a staring contest, which they usually accept, because they think staring at a foreigner is perfectly acceptable.  Children stare, too, but they stare at everything and anyone.  Elderly men should know better.

Last weekend, there was a man sitting in the middle of two seats on the train, and on a third seat, he had his backpack.  He was probably in his 50s, and it looked like he may have been hiking.  Now, this wouldn’t be a problem normally, except this was a packed train in the heart of Tokyo.  He had his shoes off and was massaging his feet.  There were elderly people who wanted seats and my pregnant fiancee also wanted a seat.  However, he wouldn’t do a thing about it.  He occupied those 3 seats like he owned them.  I kept staring at him and talking about it with my fiancee, and the man sitting near where we were standing kept looking at us and back at the rude man.  I guess he understood what we were talking about.

These days, it seems that many older people complain about young people being rude and inconsiderate.  I find that it’s the opposite.  Many high school students seem to be much more polite than the elderly, particularly in the area of Japan I live in.  I think some elderly need to evaluate their own behaviour.  I’m not saying all elderly people are rude and all young people are polite, but I find that most rude people are older.

On August 7, my fiancee and I went to the Warabi Matsuri in Warabi, Saitama with her sister.  Last year’s festival was pretty good, and I was looking forward to eating lots of festival food this year.  Unfortunately, we only had an hour until the end of the festival, and there was a pretty bad storm with spectacular lightning.  The rain forced us to head for cover while we tried to eat.  I had hoped to get pictures of the food stalls where I bought food, but thanks to the rain, I kept my camera safe.  However, I did get two photos!  What did I eat, you ask?  I had barbecued corn on the cob, jagabataa (potatoes and butter), yakisoba, karubi steak (beef rib meat) on a stick, and some flat gyoza-like food.  My favourite festival food is the potatoes.

Warabi has a large foreign population, and it’s one of the smallest and most densely populated cities in Japan.  There are plenty of Turkish people there, and at the festival, they sold kebab sandwiches.  Why did we go to Warabi for the festival?  It’s my fiancee’s hometown.  Enjoy the two pictures.

Warabi Matsuri is very colourful. Unfortunately, the skies were stormy.

Enjoy the colours. The focus wasn't very good, thanks to darkness and rain.

Am I a magnet for crazy people?

You may remember my encounter with a bit of violence involving some drunk and/or right-wing nationalist last August.  That was on the anniversary of the end of the Pacific War in World War II.  Well, yesterday, I had another enjoyable experience (said in a sarcastic tone).  I was on my way to work yesterday morning, and waiting for the train at Shonandai station, as I always do.  I found a really nice spot under an air conditioner vent, as it was a hot morning.  About a minute later, an old man, around 80 years old, came around the corner.  He looked like a typical old man except for one thing, the scroll hanging around his neck.  It had a message painted in black on it, all in Japanese, of course.  For a moment, I thought he was blind, because he had black sunglasses and was walking a bit strangely.  However, he came straight toward me, and I thought I’d get out of his way, because his eyesight may be bad.  Well, after I moved, he followed me a bit, then settled into the spot I was waiting at.  So, I thought, just a crazy old man.

It wasn’t until later that I remembered that it was the anniversary of the Hiroshima atomic bomb.  It immediately struck me that he was most likely a right-wing nationalist.  That’s 2 years in a row that I’ve been targeted by one of those nuts.  Nothing really happened this time, and it was more strange than infuriating, but I seem to be attracting these kinds of people.  It never happened before last year.

I know some people might suggest that I push back at him, but I’d rather avoid any kind of scuffle.  I was on my way to work, and I can’t afford to have any problems when I’m going to work.  But I have a message for people like this:  mind your own business and get over it already!