My previous post was about the cold winter we’re about to have here in Japan.  Well, this morning, I saw something I’ve never seen in December here, frost.  It’s usually not this cold in December.  Frost and snow is usually around in January and February, not December.  Also, it’s expected to be -3°C in the morning.  Many people I’ve talked to in Japan have never felt a temperature colder than -10°C.  I’ve experienced -42°C. 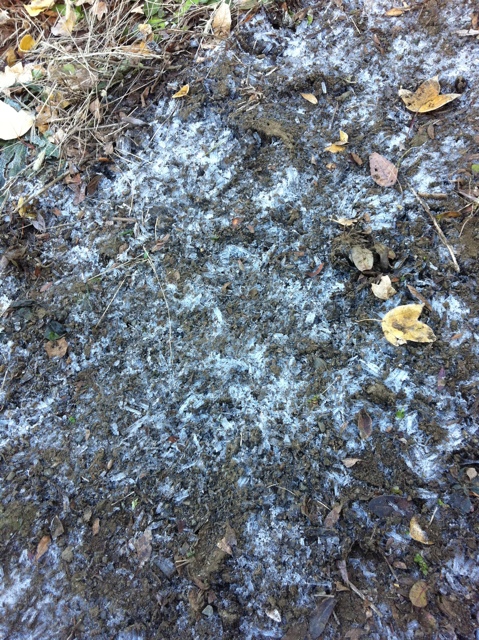 How about some wind to go with the cold?

It has been a cold November and December so far.  From what I’ve heard, October was one of the warmer Octobers on record, while November was one of the colder ones.  The Japan Meteorological Agency is predicting that this winter will be colder than last winter.  Last winter was a cold one!  And then today, we had an incredible amount of wind.  Goodbye leaves.

The wind was devastating to the gingko leaves.

It’s funny how the temperatures we’re getting now are cold to me.  In Canada, this kind of weather, averaging 9 to 14 degrees Celsius, would have been balmy at this time of year.  It’s been extremely snowy and cold in Canada so far this fall.  But here in the Tokyo region, we rarely get snow.  So why is it that I feel so cold?  Of course, today’s wind made it feel very cold.  But even when it isn’t windy, I feel very cold.  I think it has to do with the environment I live in.  This kind of weather would have felt cold in early October in Canada.  However, it would feel warm in December.  It’s all in how you perceive it.  It’s what you’re used to.  By this time, below 0 is the norm in Canada, so above 0 would feel warm.  However, we have yet to feel a significant amount of time at this temperature, so it feels cold.

But another big difference is inside the home.  In Canada, thanks to central heating and good insulation, it’s always warm inside. In Japan, homes are built to allow air to move freely during the extremely hot summer months, but they don’t seem to take into account that it gets cold in winter. No central heating, except in the north.  Poor insulation is a big problem here.  Some people have suggested that insulation isn’t used much here because of the humidity, but I don’t buy it.  Vancouver and Victoria are very humid for half the year, yet they have good insulation.  In the 5 years that I lived in Victoria, I had no problems with insulation.

Inside in Japan, it is cold. This can be alleviated by using kerosene heaters, electric heaters, air conditioners, or kotatsu (tables with heaters underneath).  Some people even have heated floors.  But I think one of the best things is to have some nice hot food, such as ramen, nabe, udon, or curry.  That’ll heat me up.

What do you do in cold winter months to keep yourself warm?

You’re from Canada, so…

…you must love cold weather. Summer must be hard for you.

I like spring and fall, but the weather is somewhat unstable.  It can suddenly become cool and make it difficult for me to get out of the shower in the morning.

That brings us to summer.  Summer in Japan is predictable and stable.  Every day, the weather is likely to be hot, humid and sunny.  I like that in Japan’s summer.  I even enjoy the hot weather.  It means I don’t have to feel cold for the next 3 months, at least not until November.

So, to everyone who thinks I must like winter because I’m from Canada, you’re wrong.  Give me Japan’s hot and humid summer over winter any time.

Autumn has just begun, so this is a quick comparison between the seasons of the Tokyo area and Edmonton.  First of all, Edmonton is in a temperate climate zone, which has warm, short summers and cold winters.  Tokyo is in a humid subtropical climate, which has hot, humid summers, a monsoon season and a mild winter.

Autumn – In Tokyo, it starts out very warm or even hot in September, and finishes cool in December.  There’s plenty of rain and possible typhoons in early autumn.  In November and December, the leaves change colour.  It’s a generally pleasant season that is great for outdoor activities.  In Edmonton, it starts out warm or cool in September, and finishes very cold in December, below 0 degrees Celsius.  The leaves change colour in September to October, and snow can start as early as September or as late as November.  I’d have to say that autumn in Tokyo is far better and very comfortable.

Winter – In Tokyo, it starts out comfortably cool in December, but quickly gets colder, with temperatures of around 7 or 8 degrees in January and February.  Snow is possible, but doesn’t happen every year.  Plum trees start blooming in February, with cherry trees blooming in March.  By March, the temperatures start getting comfortable again.  In Edmonton, it’s cold and snows the entire winter.  March may see some thawing, but the snow is usually still there.  Unless you like cold weather, Tokyo has the better winter, where you can stay active outside all season.

Spring – In Tokyo, the season starts out with blooming cherry blossoms and comfortable temperatures.  It’s absolutely beautiful by May, and it starts getting hot then.  Spring finishes in June with hot, humid weather and the beginning of rainy season.  In Edmonton, spring starts out cold, but in April, the snow melts and leaves piles of sand on the side of the roads.  This results in possible blowing sand.  Everything starts getting green around the end of April or beginning of May, and it becomes quite beautiful.  Spring ends in June with warm weather.  Snow is often possible as late as May.  Who wins?  Tokyo is beautiful, and it’s the most amazing season I’ve seen ever.  Edmonton has residual winter, and it can be quite messy.  Tokyo has the better spring.

Summer – In Tokyo, summer starts out hot, humid and very rainy.  It’s rainy season.  That lasts into July, when it becomes hot, humid and very sunny.  The rest of summer until September is hot, humid and very sunny with the occasional typhoon.  This season has very stable weather with little variation from day to day, and even night time temperatures are hot.  Very uncomfortable for sleeping.  In Edmonton, summer starts warm, and is generally warm until early September.  In September, it starts getting cool.  Summer is unstable, and there can be widely varying temperatures, as well as incredible thunderstorms, which are very frequent.  It can be hot, and it can also be quite cool.  Who wins the summer battle?  This is a difficult one.  Edmonton is more comfortable, but the weather is unpredictable.  I can depend on the weather being stable in Tokyo in summer, even though it is incredibly hot and humid.  I’d call it a draw.

Sorry about the lack of updates lately.  I blame 2 things.  First is the weather.  It’s so cold, and trying to warm up at home is a difficult task.  I have an air conditioner/heater, but it struggles to warm anything when it’s this cold.  I don’t find I’m very motivated to do much at home when I’m just trying to keep myself warm.  Another is that I’ve been playing The Sims 2 a lot.  I got the game several years ago, but couldn’t play it on my old computer.  On my new computer, it works great!

Anyway, the weather has been interesting this week.  Mostly cloudy and rainy, as well as cold.  But on Tuesday, it actually got up to 20 degrees.  One day of spring with cold winter days on each side.  Very strange.  Next month is March, which means spring-like weather is coming.  By the end of March, it should be pretty comfortable outside.

It snowed! Spring is next?

It has finally snowed! This is the first snow I’ve seen in 2 years in Japan. It’s not staying long, though. This month, many flowers will start blooming, and spring is coming soon.